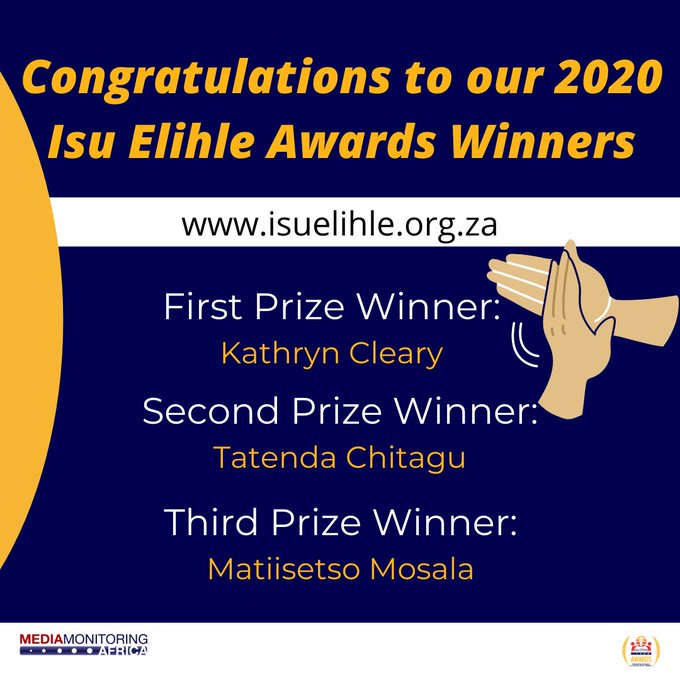 On Monday, 14 December 2020, Media Monitoring Africa (MMA) announced the 2020 lsu Elihle Awards winner. “Isu Elihle is an isiZulu phrase that means a “Great Idea” when translated to English, these Awards were launched in 2016 and has been running for four years. The Awards aim to encourage fresh reporting, innovative approaches and insightful investigations that seek to give children a voice and elevate the status of the child all over Africa. In the past two years, the awards were open only for journalists in the Eastern and Southern Africa but from 2018, journalists from all over Africa were included.

We are excited to announce this year’s winners: 1st prize and overall winner of the 2020 Awards goes to Kathryn Cleary who is a freelance health journalist for Spotlight based in Cape Town, South Africa. Cleary is awarded for her six-part series coverage on the impact of the Covid19 pandemic and lockdown on the nutritional status of children in South Africa. She receives a cash prize of ZAR25, 000 after being ranked the overall winner by a panel of judges who are media practitioners. The judges commented on her reporting by saying,” Kathryn lets the facts speak for themselves and does not attempt to pull any emotional strings, she knows she doesn’t need to. Read the story here.

The second prize of ZAR15 000 goes to Tatenda Chitagu for his story titled, “Covid19: Children’s horror tales from isolation canters”. He looked at the poor conditions in which returnee children had to face in Zimbabwe’s Covid19 isolation and quarantine centres, these posed a great risk to their health. Chitangu is multi-media journalist from Masvingo, Zimbabwe. He corresponds for News Day as well as the Washington Post. The judges commented on his story saying,” A well written story that did access a range of children’s voices as well as experts and government. I wanted to see images as well as perhaps go more into depth about how these centres are violating children’s rights in accordance with the provisions of the constitution. Chitagu receives a cash prize of R15 000.Read the story here.

The 3rd prize of ZAR10 000 goes to Matiisetso Mosala for her story about the education gaps between learners in Lesotho .She reveals how underprivileged children are forced to drop out of school because they cannot afford school fees. Her article is titled, “Lesotho’s education system now shutting out kids from poor families” was published at the Centre for investigative journalism website. Matiisetso is an investigative journalist from the Mountain Kingdom of Lesotho. Currently she is an Investigative Journalism fellow at MNN Centre for Investigative Journalism based in Maseru, Lesotho. The judges commented on her reporting saying, “The journalist does her best to minimise harm, and shows commendable awareness of all the ethical concerns”. Read the story here.

However there was no Mandy Roussouw category winner this year, even though the stories were great, the powerful were not held accountable in their stories. The Isu Elihle Awards 2021 application date will be announced soon, we call upon journalists from all over Africa to enter the awards. Congratulations to all the winners!