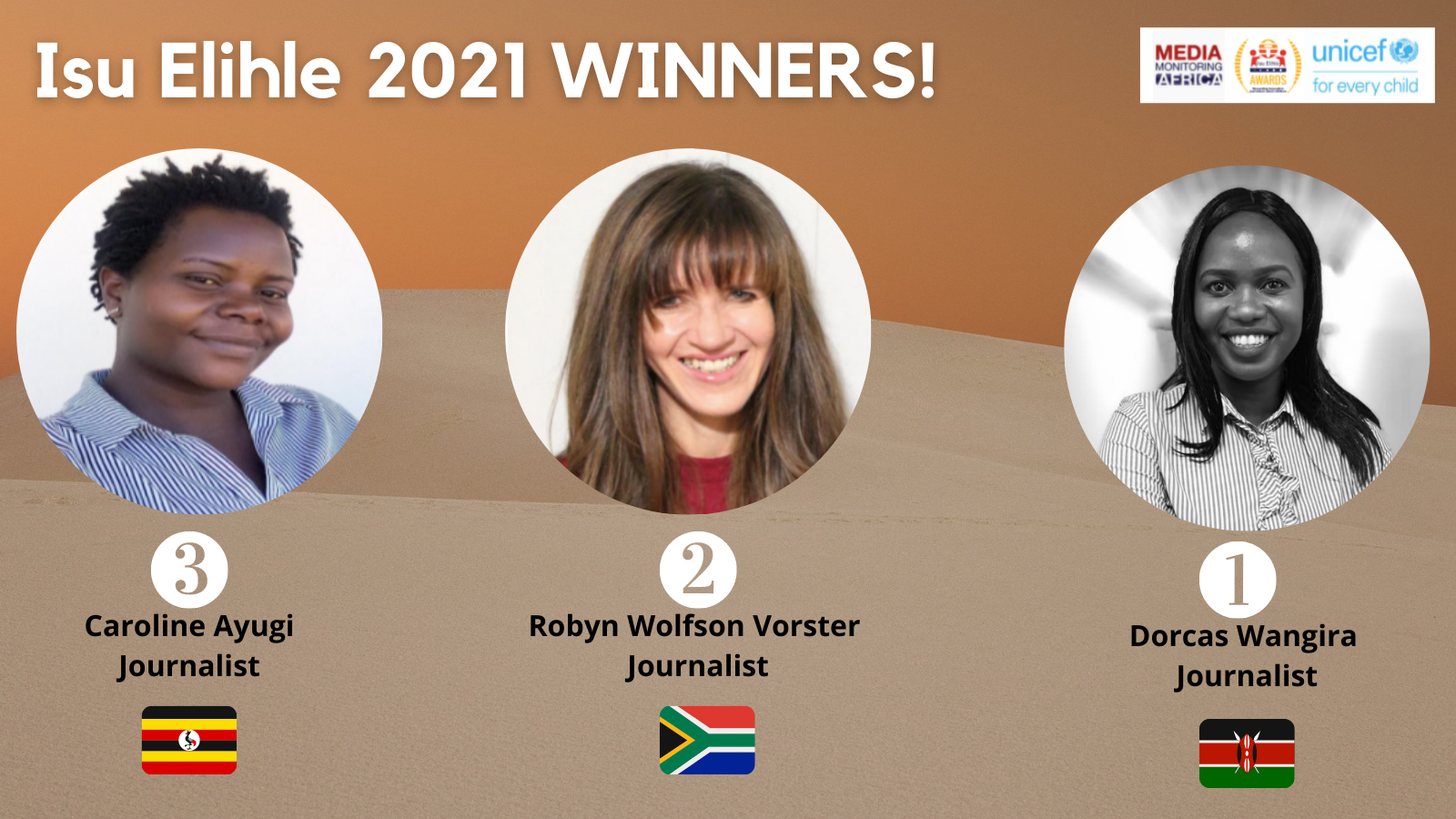 JOHANNESBURG, 25 November 2021- Media Monitoring Africa (MMA) and UNICEF announced the 2021 lsu Elihle Awards winner on Thursday 25 November 2021. Isu Elihle is an isiZulu phrase that means a “Great Idea” when translated to English, these Awards were launched in 2016 and has been running for five years. Over a hundred applications were received from nineteen African countries which shows a huge growth. These Awards aim to encourage fresh reporting, innovative approaches and insightful investigations that seek to give children a voice and elevate the status of the child all over Africa. In the past two years, the awards were open only for journalists in the Eastern and Southern Africa but from 2018, journalists from all over Africa were included.

We are excited to announce this year’s winners: 1st prize and overall winner of the 2021 Awards goes to Dorcas Wangira who is an early career journalist based in Kenya, she is passionate about science and human-interest features. She recently started working for BBC. Dorcas is awarded for her two-part series coverage on children titled, “Born in prison”. She receives a cash prize of ZAR25 000 after being ranked the overall winner by a panel of judges who are media practitioners. The judges commented on her reporting by saying, “Excellent series, a lot of time and effort was taken to present the issue comprehensively and from all angles. I love the inclusion of things like the drawings of children whose mothers were in prison and their memories of time there. The Journalist engaged the issues with sensitivity, and you never got an impression of secondary trauma to the children involved. The stories were comprehensive and gave the reader a full picture. The article was very clear at drawing the two video reports together and then packaging the whole series together in a way that was comprehensive and showed the legal and ethical challenges, held the powerful accountable and presented options for the future. Very well done”. Read her story here

The second prize of ZAR15 000 goes to Robyn Wolfson Vorster for her four-part series published in the Daily Maverick, it talks about the untold stories of missing children in South Africa. Robyn focuses on writing and advocating for changes in legislation and policy regarding children and giving vulnerable children a voice. The judges commented on her story saying, “This is a thorough exploration of the issues that used beautiful imagery and personal accounts to highlight the issues surrounding missing children in South Africa. Despite the challenges in accessing these children, the journalist was creative in her approach and ensured that although often ‘voiceless’ these children were presented as the focus. She also accessed other children about their opinions, giving them the ability to fully participate in the conversation about issues that affect them”. Vorster is also the winner of the The Isu Elihle Mandy Rossouw Accountability Category which is awarded to a journalist who show remarkable bravery towards holding governments and relevant institutions accountable to ensure that the rights of children on the continent are met. She receives an additional R10 000. Read the story here.

The 3rd prize of ZAR10 000 goes to Caroline Ayugi for her two-part series about how the education department’s limited digital tools slow down learners with visual impairment. Her article is titled, UGANDA: Education system, limited digital tools slow down persons with visual impairment. Her experience in working as an online content producer for Oysters & Pearls-Uganda, a charity that Cultivates Education and Technology and among the visually impaired for the past three years has helped her to identify and write more underreported stories about the challenges Persons with Disabilities in Uganda face. The judges commented on her reporting saying, “This is an interesting and engaging article. While a lot has been written about Covid’s impact on the education system, the experiences and lived realities of children with disabilities, especially in rural and technologically disadvantaged districts, is largely under-represented. It was refreshing to hear from these children as individuals with agency instead of seeing them lumped into a homogenous grouping. Read the story here.

The 2021 application date will be announced early next year, we call upon journalists from all over Africa to enter the awards. Congratulations to all the winners!